Aurora James Wants You to Know Sustainability Isn’t That Hard


Aurora James, the designer behind Brother Vellies, is surprisingly down-to-Earth, given all of her success. She won the CFDA/Vogue Fashion Fund in 2015, has created countless custom heels for celebrities at the Met gala, and even provided the footwear for Rihanna’s first Savage X Fenty show. All the while, she’s among the few designer who can boast that her brand is truly ethical.

“I’ve learned so much from her, not just about sustainable fashion, but about running a sustainable business,” Elaine Welteroth said of her close friend. “Aurora is as much a creative visionary as she is an incredibly savvy businesswoman. And her vision for sustainable fashion precedes the trend. Now everyone’s talking about sustainability, and employing women and giving them livable wages. She was doing it before people were talking about it, before it was popular.”

Earlier this month, James hosted a natural dye workshop as part of Bombay Sapphire’s “Find Your Canvas” initiative. James took the crowd through how to dye fabric without chemicals — pro tip: leftover Avocado pits produce a gorgeous shade of pink — and proved that making small sustainable choices every day is actually kind of easy. The Daily got a chance to catch up with her after the event.

You held your first presentation at Paris Fashion Week in September. What was that like?
It was really lovely! We did it at the Peninsula Hotel which has this really magical room called The Rotunda that I fell in love with over the summer while I was in Paris. I designed a lot of the collection when I was staying at that hotel, actually, when I was just visiting and eating a lot of amazing food. So, it really made sense to have a presentation there. It was really amazing to be able to fill the space with so many beautiful women and so many beautiful women of color as well.

What was your favorite thing about the event?
Seeing how happy all of the models were that were in the show because there were lots of different sizes skin tones represented and I just felt like they were all really grateful. A lot of them wrote to me afterwards and were really, really touched by the whole experience. And even the music! Mia Moretti was the DJ and we worked really hard on a playlist that was only female singer/songwriters. And it was mainly women of color singing as well, so it just felt like a really historical moment.

You used to work as a model agent. How does that background factor into your casting decisions?
That was a really early job for me… It helped me understand some of the systemic issues that come with trying to have more representation in the industry. I was having a conversation with a fashion editor the other day who was like, “All of these designers have no excuse when they don’t have plus sized models.” And I’m like, “Well, sometimes the agents don’t make those models available to fit to those designers much in advance.” There’s things that a lot of people don’t even think about that also come from the agency side that need to be addressed. All the blame can’t fall on the designers.

I know how hard it was for us to be able to have the diverse body sizes and it was really only possible because I’m an accessories designer, and the ready-to-wear we had at the presentation was super simple. If it had been really elaborate we wouldn’t have been able to have diverse sizes because you only actually find out your model rotation like a day or two before your show. And designers work on their ready-to-wear six months before. Every single body is different so it’s not like you can just make a size twelve and all size twelves are going to fit the same way.

It’s not like you can just swap them out, either. If you’re really doing the girl justice you need to take her measurements. You need to study her body, you need to make it perfect. The whole thing is really complicated. As a designer, you want every single girl that walks on your runway to look amazing so you need to make sure that top-to-bottom we are figuring out a strategy to make sure that we can get all of these girls on the runway in a way that makes sense for everyday.

I’ve heard that from designers before, but it’s not something that’s been discussed at say, a public forum or panel.
Obviously, designers and agents already know what’s going on but it’s really tough. Usually there’s a lot of confusion around it. It seems to be primarily [coming from] the public and fashion editors. A lot of it is a financial thing, too. It costs more money to have a model come in a whole bunch of times and fit beforehand and it’s a lot more money to make something that’s really special for someone. Ultimately, for every single person who runs a business, it’s up to them if they want to invest in it or not. It’s not really anyone else’s business how a relationship may work between a designer and an agency.

But what is our business is what brands put out. We can choose to support or not support something based on how that business shows up. It’s not every corporation’s responsibility to choose a political side, and most of them aren’t going to. But I’m going to pay attention to ones that do and pay attention to companies that speak out for my basic human rights. And I’m gonna notice the ones that don’t. I’m going to focus my energy on supporting the ones that do instead of trying to force all the other ones to do something that maybe isn’t intuitively what makes sense to them, and that they might only be doing from a marketing standpoint, anyways.

Is there anyone out there that is really genuinely trying to do well that you support?
I really love and admire Brandon Maxwell. Because he has always cast from his heart, and has always showed up as being really diverse and truly authentic to the models that he genuinely thinks about when designing his collection.

How did you get involved with the Find Your Canvas initiative?
I’ve never done a workshop like this before. In my office we’re teaching each other new things all the time, so it was sort of second nature to teach a workshop like this. Bombay approached me about doing it for The Other Art Fair. It was such an amazing idea to actually be able to open it up to the public because I share so much content of our process — plants, flowers, and all that jazz — on social. It was a really amazing opportunity to actually engage the public and try to inspire them to also get creative. 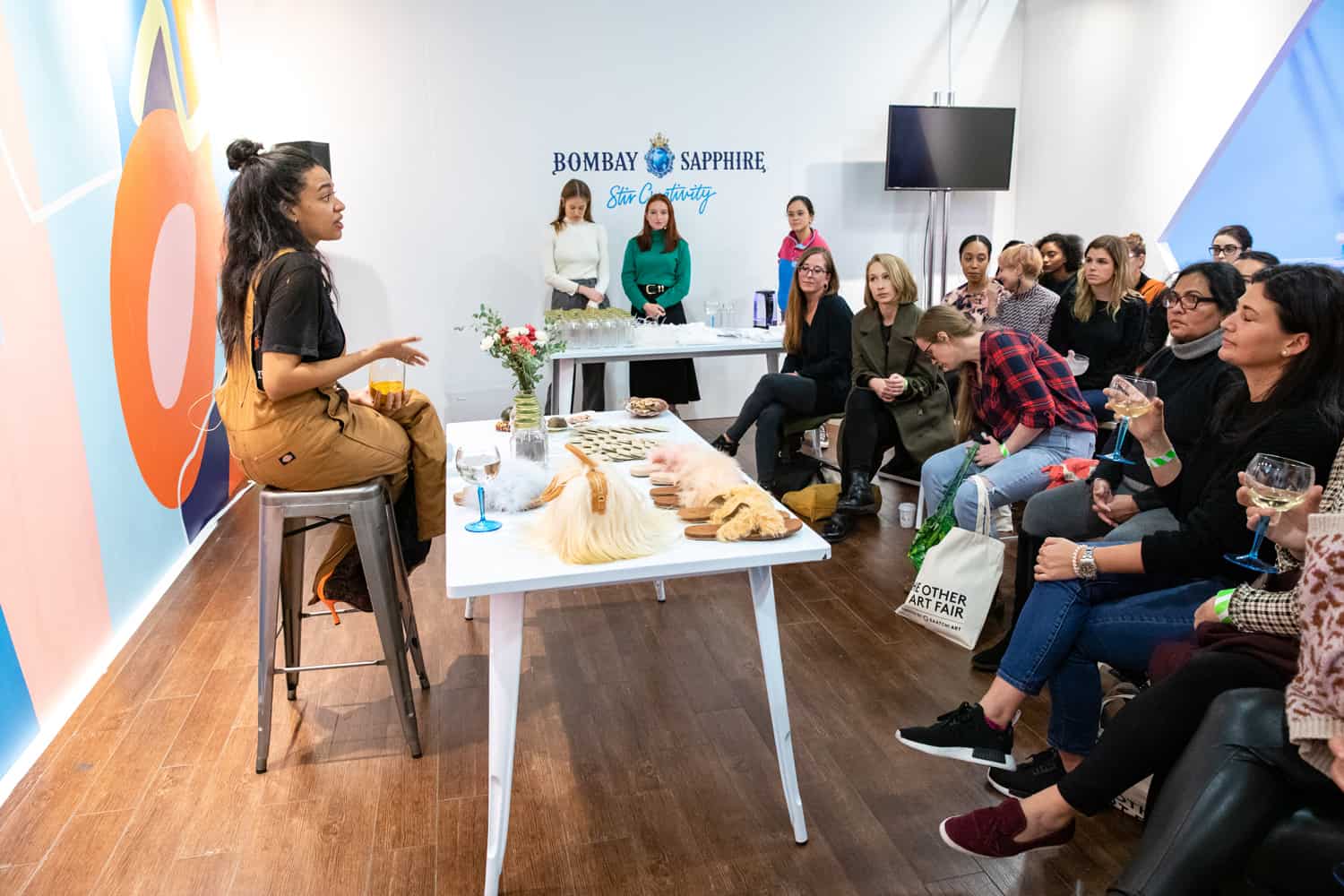 You told the audience that natural dyes don’t always produce consistency across products and that over time the colors could change. How have you been educating your customers about that?
I try to do my best through social media and a lot of times on the website we’ll show different color samples or different pattern examples. It does alternate. But our product is something that’s really tangible, so it’s best if people see it in person. That’s one of the reasons why it’s so important for me to have a physical space so people can actually see the color and texture of things in real life.

Do you ever see yourself expanding these workshops, perhaps over Instagram live or something?
Yeah, I’d love to. I like to try to do little things all the time on social media and inspire people to get involved in different things. This morning I did a plant repotting which took two seconds. It wasn’t fully fleshed out. I wasn’t like, “Here’s how to do it.” But I time-stamped doing it and it should remind people that doing little things with nature every day [doesn’t have to be] such a huge production.

As your business grows, do people try to pressure you to put aside ethical and sustainable production?
Yeah, all the time. Even customers. If people complain about the price point that’s part of that pressure. If people complain about some of the fits being slightly different, that’s also part of that pressure. Anything people aren’t used to comes down to the way that things are made and when they complain about those things it makes it tough for us. But there’s a learning curve.

Do you ever get frustrated by how slow that learning curve can be sometimes?
Because I’ve worked in fashion for a really long time I can also take ownership and accountability for how responsible we are as an industry for that, and for a lot of the problems that aren’t supporting sustainability. People are like, “Why can’t [consumers] just invest more money into things they really love instead of buying five pairs of shoes that are going to fall apart after one season? Why not just buy one they’re going to have for the rest of their lives?” Obviously people are not going to do that because we’ve been telling them for years and years that every season they need to buy new things. We can’t get upset all of a sudden when people aren’t totally switching over the way they are consuming products.

In your eyes, how far has the fashion industry come in terms of sustainability and making efforts to be green in the past few years?
Pretty far! When I first started doing it no one really cared at all. Now people ask me about it and we have customers that actually ask about it more too. Early on people would seek us out if they were already into the idea. But now people who are new to the idea of byproduct materials or vegetable dyes will have beginner-level questions about it, and that’s super cool. Ultimately, consumer demand is really what’s going to help drive and build this space.

You’ve been doing this for so long, do you feel like people in the industry are finally catching up to you?
I don’t know how much of it is people actually doing it versus people just talking about doing it. Fashion has a good reputation for that sort of thing — like do one good thing and then it becomes the whole narrative. I would say people are definitely trying to and that’s amazing. Look, you can’t expect everyone to be perfect. You can just expect that people are going to try to take small steps everyday towards becoming a little bit better. So if we’ve done anything to help inspire people to make those transitions, then I’m really grateful for that.

This interview has been edited and condensed.

Fashion and art tend to get along famously, as...

When InStyle celebrated its 25th anniversary in...

What: A gorgeous, genuine python...

22 Stylish Home Gift Ideas for Anyone On Your List

Looking to shop for someone who loves...